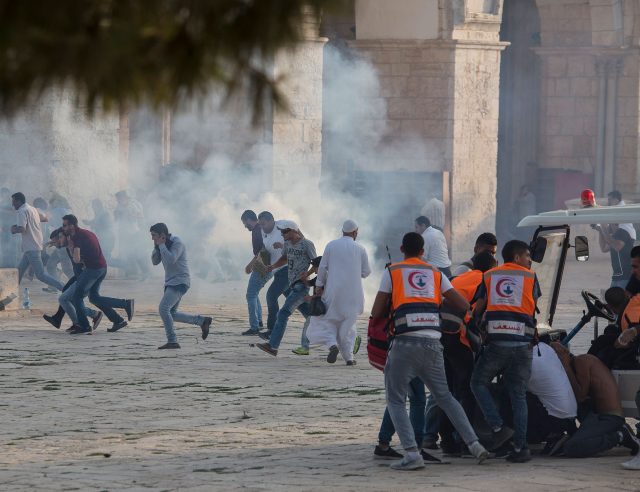 Amnesty International continued its anti-Israel bias, contradicting every non-Arab eyewitness account on the events on Thursday:

Israeli forces attacked peaceful crowds of Palestinians as they gathered at al-Aqsa mosque in Jerusalem this afternoon for the first time since Israel lifted recent security measures imposed at the site, according to Amnesty International staff at the scene.
“Israeli forces started firing stun grenades, tear gas and sponge-tipped bullets into a peaceful crowd as they stood at the entrance of the al-Aqsa mosque compound and inside. It appeared to be an entirely unprovoked attack. Some Palestinians threw empty water bottles in return. Others, began to throw stones as well,” said Magdalena Mughrabi, Deputy Middle East and North Africa Director at Amnesty International.

I was there. There wasn’t one single vantage point where you could tell either way who started it.

Even Asaf Ronel, Haaretz’ World News editor and  an avowed anti-Zionist, took issue with this description:

It’s a complex scene. Fact that from point of view of @amnesty staff it seemed unprovoked doesn’t mean nothing happened somewhere else https://t.co/uFWbybjY1z

Such background is irrelevant to Amnesty, which is wedded to its own anti-Israel narrative that trumps facts, so much so that it ignores proof that it is wrong.