No matter how many atrocities are perpetrated all over the world, there is no worse atrocity than Israel defending its citizens – at least as far as Amnesty International is concerned. It seems that the “human rights” organization really misses the good old times when Jews were defenseless: last Friday, Amnesty toldits more than one million Twitter followers:
“#Israel must stop the murderous assault on protesters in #Gaza, including killing and maiming ‘Great March of Return’ demonstrators who pose no imminent threat to soldiers. Countries must stop all military aid to Israel until this assault ends.”
To make sure everyone understood that the world’s only Jewish state behaved in ways that Jew-haters have always seen as characteristically evil, Amnesty postedanother tweet echoing the medieval blood libel:
“Malicious tactics are being employed by the Israeli military who are deliberately using weapons of war to cause life-changing injuries to Palestinian protesters. Why are weapons still being sold to #Israel?”
On Facebook, where Amnesty has about two million followers, the organization sharedthe sameposts. 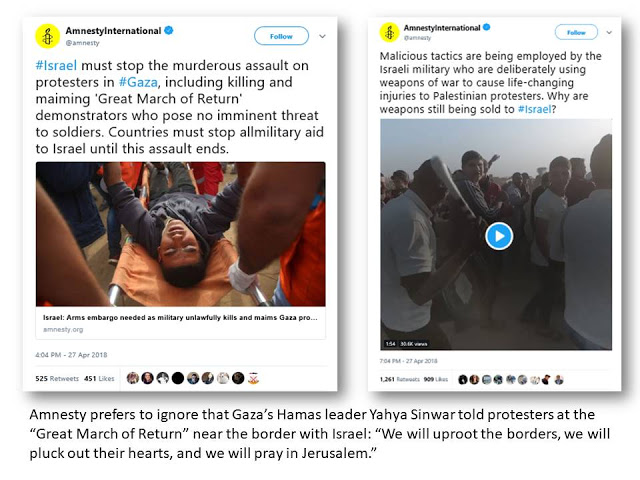 And needless to say, there were not just social media posts, but also a lengthy statementunder the title: “Israel: Arms embargo needed as military unlawfully kills and maims Gaza protesters.”
Just in case you were wondering: no, Amnesty doesn’t mention that Gaza’s Hamas leader Yahya Sinwar tolda crowd of protesters near the border with Israel: “We will uproot the borders, we will pluck out their hearts, and we will pray in Jerusalem.” No word either about the fact that many of those killed were members of terrororganizations; no word about the displays of swastikas(on Hitler’s birthday) or about the successful attempts to startfiresacross the border in Israel by releasing kites carrying burning rags or fire bombs.
Instead, Magdalena Mughrabi, Deputy Regional Director for the Middle East and North Africa at Amnesty International, sounded as if she was a deputy Hamas spokesperson – according to her, the riots at Israel’s borders are just the peace-loving people of Gaza “demanding the right to return to their homes and towns in what is now Israel.”
Right, Ms. Mughrabi: now it’s Israel, but you can always hope it will eventually be Hamastan if Amnesty keeps working as hard as it can to rid the world of its only Jewish state.
So let’s conclude with a picture worth a thousand words to illustrate what Amnesty is cheering on. 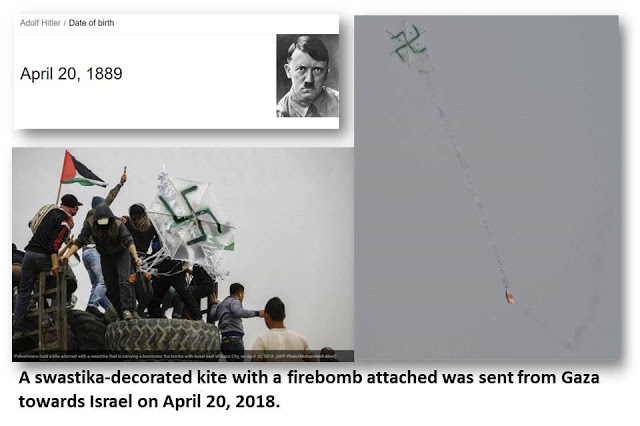