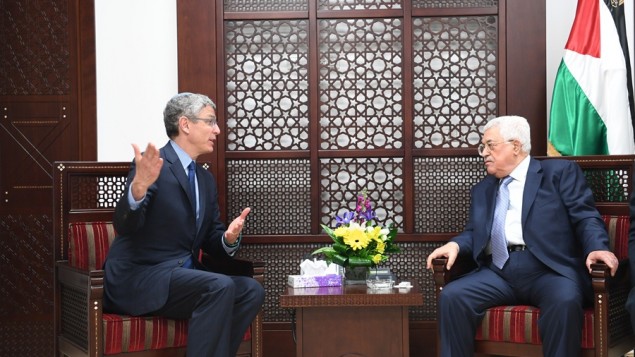 Here is how the official Palestinian Wafa news agency reported the meeting between Mahmoud Abbas and the leaders of the Union for Reform Judaism:

President Mahmoud Abbas Thursday told a delegation from the Jewish reform movement in the United States that Israel’s persistence in settlement construction in the occupied West Bank and East Jerusalem obstructs peace efforts.

“Israel’s persistence in settlement construction as well as its policy of killing, home demolitions, detentions and raids obstructs initiating a serious peace process leading to an end to the Israeli occupation,” he told the delegation from the Union for Reform Judaism (URJ) who met him at the presidential headquarters in Ramallah.

Abbas affirmed to his guests the Palestinian leadership’s commitment to achieving a comprehensive and just peace based on relevant UN Security Council resolutions, the two-state solution and the Arab Peace Initiative in order to establish an independent and sovereign Palestinian state on pre-1967 borders with East Jerusalem as its capital.

The URJ delegation stressed their full support to the two-state solution to the decades-old Palestinian-Israeli conflict and justice to the Palestinian people through Palestinian statehood.

They slammed Israeli settlement construction as an obstacle to the peace process.

From the Palestinian perspective, this meeting was a success. They spread propaganda and the Reform Jews helped them. In fact, they amplified them for him in Israeli media:


“I was impressed with the president’s clear and unequivocal commitment to the two-state solution,” [URJ President Rick] Jacobs said in a statement. “He clearly is frustrated with the lack of progress, or even the existence of ongoing negotiations. I share that frustration.”

Meaning, they are telling the world that Abbas is more interested in peace than Netanyahu.

Yeah, they brought up incitement against Jews and Abbas deftly told them that Israel is just as bad. That shut them up, because they only know what they read in the New York Times.

It is still amazing to me how clueless some Jewish leaders are not to realize that they are being used as pawns by those who stress every day how they want to destroy Israel while mouthing their support for a “two state solution” – where both states are Arab.