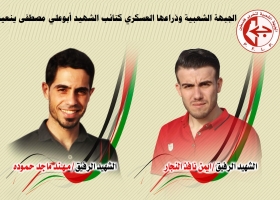 Two PFLP terrorists apparently blew themselves up this morning as they were attempting to attack Israel, according to the terror group.

“The two martyrs are Ayman Nafez al-Najjar, 24, and Muhannad Majid Hamouda, 24, who arrived at the Indonesian hospital in scattered pieces,” said Ashraf al-Qudra, a spokesman for the Health Ministry in Gaza.

I do not recall the words “scattered pieces” being used before by the Gaza Health Ministry. It is almost poetic.

The PFLP said they were on a “combat mission” when they were “martyred.”

It is a shame that the PFLP cannot afford to stage the “martyr photos” where their members pose in uniform with submachine guns in the case of their eventual deaths.

Unlike Hamas and Islamic Jihad, the PFLP is not an Islamist group but a secular, socialist group. Desire for “martyrdom” is universal among all Gaza terror groups, though, in the pursuit of killing Jews.