TOP NEWS
http://elderofziyon.blogspot.com/2016/11/ali-abunimah-is-pining-for-pineless.html
In a recent post on the “Pine libel,” EoZ focused on a commentary by the notorious antisemite Gilad Atzmon who described the forest fires raging in many parts of Israel last week as nature’s revenge against evil Zionist efforts “to make Palestine look like Europe” by planting supposedly non-native pine trees. Well, as EoZ showed, pines are native to the region – which kind of ruins Atzmon’s triumphant conclusion: “Like the pine tree, Zionism, Israel and the Israeli are foreign to the region.”
But Atzmon’s ignorant screed wasn’t even original: the claim that Zionists planted pines “to make Palestine look like Europe” is rather popular among anti-Israel activists, and can e.g. also be found in a lengthy Electronic Intifada (EI) articlefrom 2010, where Max Blumenthal gloated about the devastating Carmel fire: “the nonindigenous trees of the JNF were poorly suited to the environment in Palestine” and “go up like tinder in the dry heat.” Inevitably, Blumenthal later recycled the EI article for “Goliath,” his book-length demonization of Israel.
With the fires raging in Israel last week, Ali Abunimah promptly promoted Blumenthal’s 2010 article again, emphasizingthe claim that the “Zionist regime planted forests to erase traces of Palestinians.” 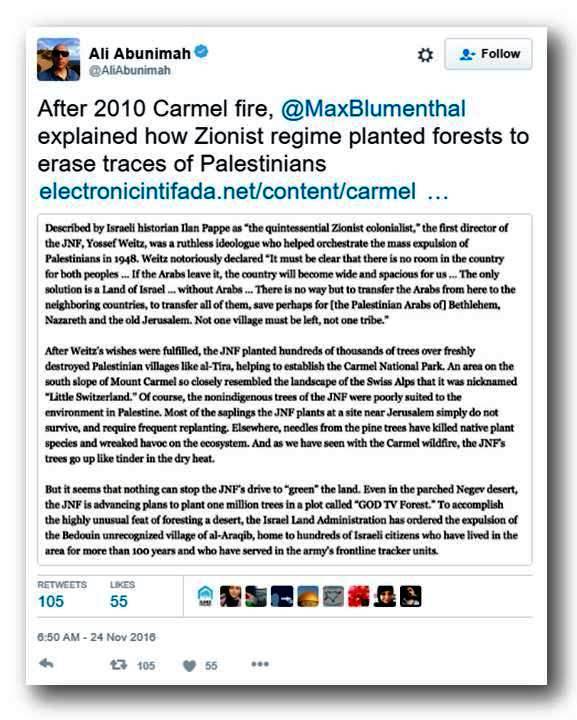 In another tweet, Abunimah opinedthat “Israel’s use of ‘forest planting’ of ill-suitied[sic!] tree species to conquer Palestinian land is root cause of the fires.” He linked to a JTAarticlewhich he apparently hadn’t really read: the article didn’t say that Israel had planted “ill-suited tree species,” but on the contrary quoted the JNF’s director of forest management as praising “these pioneering pines” for doing “a wonderful job for the first generation.” The article also explicitly mentioned the “Aleppo pine, also known as the Jerusalem pine” – so Abunimah, who after all claims to be Palestinian, could have noticed that the pine wasn’t named for a European location… 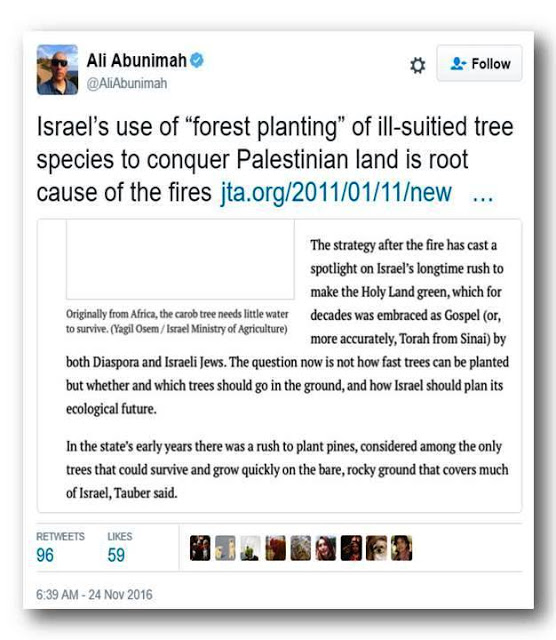 But Abunimah insistedthat “Fires in ‘Israel’ are caused by planting of non-native pines by European settlers and disastrous Zionist land mismanagement;” and he even mocked Jack Mendel, a journalist for the British Jewish News: “‘journalist’ @mendelpol thinks I made up the facts about Zionist colonizer filling Palestine with highly flammable non native pines.” 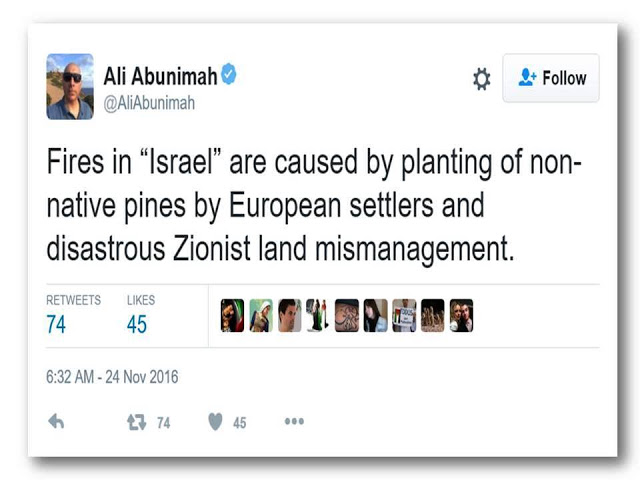 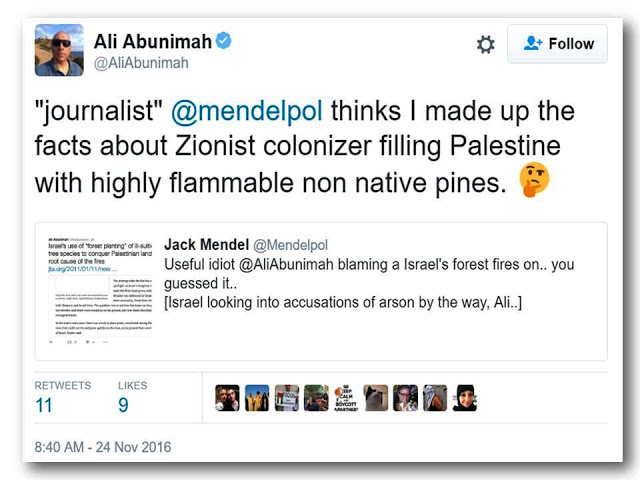 Well, if Abunimah had bothered to read the JTAarticle he linked to so helpfully, he would know that his “non-native pines” are named after the now so unfortunate Syrian town of Aleppo, and he could actually also have learned something about “land mismanagement”:
“For centuries the area was covered in a patchwork of squat, dense low-lying forest, especially in the native woodland areas of the Carmel, Galilee and the Judean hills. But by the time the early Zionist settlers arrived, much of the forestland had been depleted, used over the years as firewood, building material, grazing land for goats and sheep, and even train tracks in the Ottoman era.”
Let me also add that I don’t think anyone would ever accuse Abunimah of making up facts – his record is clear: he’s always making up lies about the “Zionist colonizer.” As it happens, this time the lies he made up exposed his lack of knowledge about the historic Palestine that he claims as his homeland.
But since Abunimah is the sonof a high-ranking Jordanian diplomat and presumably sometimes goes to visit his family in Jordan, I have a suggestion: next time he visits, he could plan a family excursion to the Dibeen Forest Reserve, a “pristine pine-oak habitat” which is said to feature “Aleppo pines” that “are some of the oldest and largest in the Kingdom.” According to one travel guide, it’s rather small but nevertheless “a nice destination for peace and quiet” – how about it, Ali Abunimah? To get into the mood, you could check out the relevant pageat “Magic Jordan,” which notes that Dibeen forest includes the “indigenous Aleppo pine” and “is representative of the wilderness that once covered a large part of north-western Jordan.”
Admittedly, the site’s photo gallery offers some views of the reserve that look just like those places in Israel that monstrously evil Zionists transformed from barren hills to “little Switzerlands” – and it’s a depressing thought that some people might wish for it all to burn down just because it doesn’t fit their ignorant ideals of a pristinely barren Palestine. 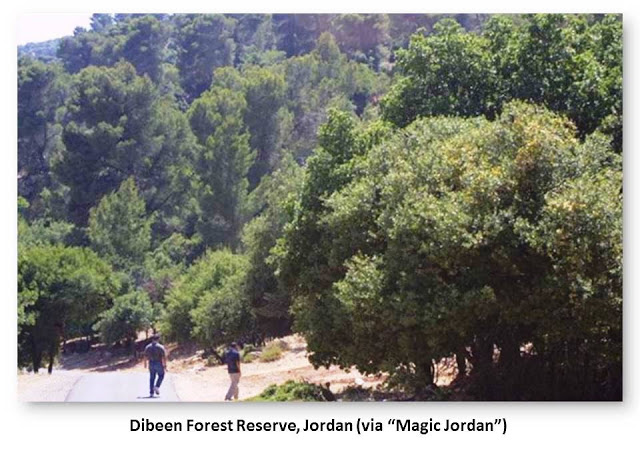