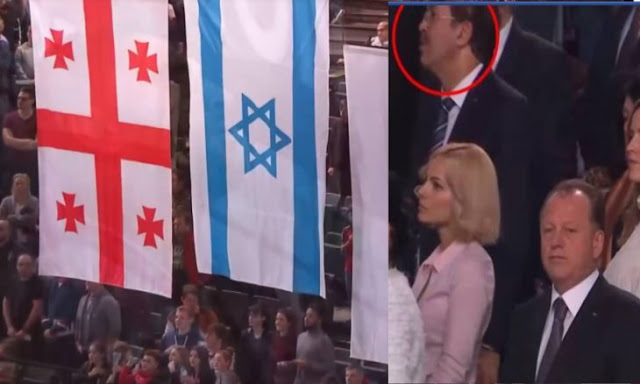 During the playing of Israel’s national anthem Hatikva, the president of the Algerian Olympic Committee Mustapha Berraf was seen, standing up, along with the entire crowd. You can see him circled in a couple of quick scenes here.

Naturally, there was an uproar in Algeria for his not thinking of sitting down during the Hatikva.

Berraf resigned from his position, even though the Olympic Committee didn’t want to accept his resignation.

A major Algerian news site today published how awful normalization with Israel is, based on this story, and it then descends into antisemitism as it accuses Algerian Jews of never being loyal subjects.

The Jews of Algeria were a fundamental cause of the occupation of Algeria in 1830. The Bakri and Bushnaq families were among the largest Jewish families at the time, enjoying strong political influence and high economic status, through their control over foreign trade and specifically the wheat trade, which represented most of the Algerian exports to France. And they were involved in the famine and debt crisis that caused the occupation of Algeria.
The Jews of Algeria were agents and traitors working as translators and spies for the French army, which caused the French government to grant them citizenship by virtue of a decree (Cremieux) dated October 24, 1870 AD, and this decree states that the Algerian Jews have become French citizens. Their number was estimated at about 37,000 Jews at the time, which means the voluntary abandonment of their Algerian identity and their acquisition of French identity, and the enjoyment of all political and civil rights, after they betrayed their religious courts and accepted military service in the French occupation army.

This is the insanity of how much of the Arab world looks at Jews and Israel. And it proves yet again that anti-Zionism and antisemitism go hand in hand.