Alexandria Ocasio-Cortez certainly isn’t the only one jumping at the chance to make absurd comparisons to the Holocaust: 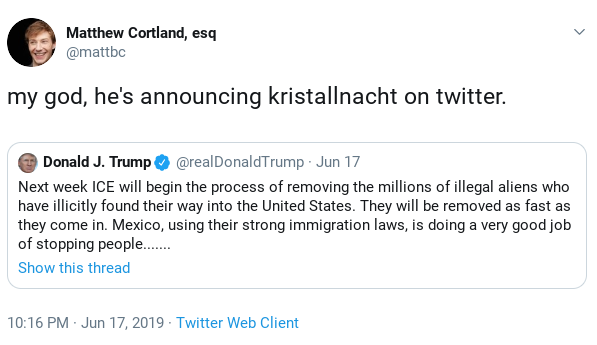 But then again, this is not the first time Alexandria Ocasio-Cortez has done this.

Last November, she compared the migrant caravan crossing the border from Mexico with Jewish refugees that the United States turned away before World War II:

And just 2 months ago in April, AOC used a Holocaust reference in defense of Ilhan Omar:


[AOC] also shared an image of the words of “First they came…,” the famous poem by German theologian Martin Niemöller that was inspired by the tragedies of the Holocaust. (The words are mounted on a wall at the U.S. Holocaust Memorial Museum in Washington.)

“First they came for the socialists, and I did not speak out—
Because I was not a socialist.

“Then they came for the Jews, and I did not speak out—
Because I was not a Jew.

“Then they came for me—and there was no one left to speak for me.”

Ocasio-Cortez’s tweet sparked major backlash, with critics accusing her of trivializing the Holocaust and slamming her for doing so in defense of Omar, who has repeatedly fought off claims of anti-Semitism.

And now AOC is at it again. 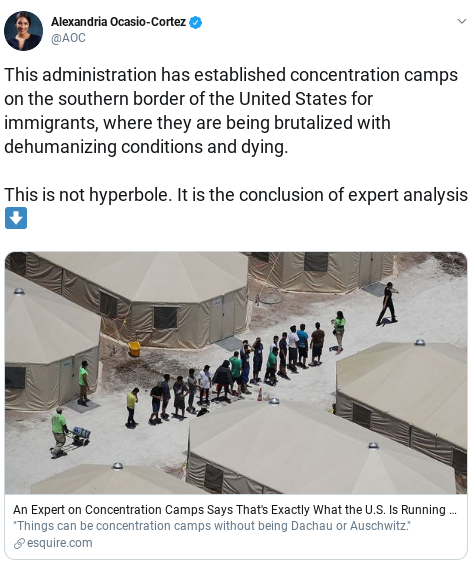 She is trying to create this equivalency in people’s minds in order to score political points.

Republicans have criticized AOC’s manipulation of the Holocaust, all along the way — as have some Jewish organizations.

But this time around — the third time was not the charm.
Many people defended Cortez and attacked those who criticized her.

But some of her defenders were more cautious. Democratic Rep. Henry Cuellar tried to apply Pelosi’s defense of Omar in defending AOC — she just uses words differently.

Bernie Sanders, who could use her support as Elizabeth Warren closes the gap in the polls, nevertheless distanced himself from the comment:


Jewish 2020 presidential hopeful Bernie Sanders, Ocasio-Cortez’s fellow progressive, distanced himself from her reference to concentration camps in a CNN interview Tuesday evening. “I didn’t use that terminology,” noted Sanders, subsequently repeating twice in the interview that he had “not used that word.”

But others who you’d expect to defend Cortez, were more willing to criticize:

“Owes a major apology to the American people”

NBC’s Chuck Todd criticized not only Ocasia-Cortez — he lambasted the Democratic Party as a whole: 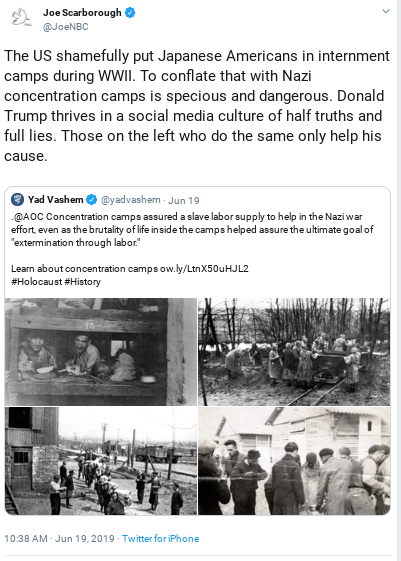 Not surprisingly, the Wiesenthal Center and Yad VaShem to come out with criticism of what Cortez said — after all, that is to be expected.

What was not expected is that Poland, which has its own problems with the Holocaust and Poland’s place in it, got into the act too:

With this letter, I am formally inviting @AOC to come to Poland,where Adolf Hitler set up the worst chain of concentration camps the world has ever seen, so that she may see that scoring political points with enflamed rhetoric is unacceptable in our contemporary Western societies pic.twitter.com/ivOTfmiCfo

You couldn’t get a larger public discussion of the Holocaust if you tried.

Bottom line, at a time that ignorance of the Holocaust is growing among millenials, Alexandria Ocasio-Cortez not only proves the point — she is unintentionally helping to draw attention to the problem.