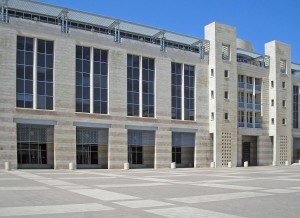 Jerusalem, October 4 – A cohesion of canine fecal matter sat so long on the pavement of Israel’s capital city that it has evolved a consciousness and communication skills, according to a spokesman, and now holds the front-runner position in a hotly-contested election campaign to succeed Nir Barkat at the head of the municipality.
P. Tabaat, the representative, told an assemblage of reporters Thursday that the chunk of doggy-doo sat at the intersection of Shabbazi and Lod Streets in the Nachlaot neighborhood long enough for its constituent microorganism population to develop into colonies, which, over the eons it sat uncollected, grew into a unified organism with more to recommend it than any of the humans campaigning for the mayoralty, and, seeing the opportunity to improve the city, launched its own election bid. Elections are scheduled for the 30th of this month.
Tabaat cited several polls showing the excrement in the lead over previous front-runner Moshe Leon, with 47% of those surveyed choosing the feces over the career politician, who polled at 29%. Likud candidate Zeev Elkin polled a distant third at 12%.
“It’s an obvious choice to an clear-headed citizen,” explained Tabaat. “A turd that’s known the grittiness of the city’s streets has much more resonance with the day-to-day struggles of Jerusalemites than any politico, especially the polished, groomed personalities of the mainstream parties. Also, a campaign being run by a piece of actual, physiological crap is shaping up to be the cleanest campaign Israel has ever seen. I know that doesn’t say much, though.”
Leon’s and Elkin’s staffs found themselves scrambling this week to explain and address the gap, which one Wednesday poll saw widening further. “It’s tough to compete,” acknowledged Leon campaign director Asla Authaus. “Even with the endorsement of the Haredim, which would normally prove key to victory, our candidate can barely crack the 30% mark. We’re in some deep, uh, trouble.”
Elkin spokeswoman Beth Hakisseh indicated that if polling continues to show the coprolite in the lead, the Netanyahu protege would consider pulling out of the race. “Not much sense in asking for humiliation on election day at the hand of a living piece of digestive waste,” she acknowledged.
Even if the kaki fails to win, predict analysts, it will upend accepted wisdom about municipal elections in Israel, Jerusalem in particular. “A strong showing such as the one we’re seeing really threatens the established power brokers,” noted local journalist Bea Yuv. “You can tell they’re producing more of the leading candidate each time they look at the polls.”