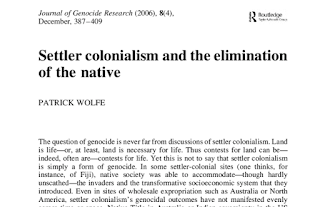 As I have been looking at the lies published in academic journals about Israel, I saw a heavily referenced paper published in the Journal of Genocide Research in 2006 by Patrick Wolfe, titled “Settler colonialism and the elimination of the native.”

It has been referenced over 1500 times in other academic papers, so it is considered a seminal source on the topic of settler colonialism. Universities have this paper in their syllabuses.

The paper assumes, without proof, that Israel is guilty of the crime of settler colonialism, not mentioning that Zionism is actually an indigenous rights movement and is anti-colonialist, as it was not driven by a large nation state as every other example of colonialism in history.

One of the sentences in this paper struck me:

[T]he conquest of labour was central both to the institutional imagining of a goyim-rein (gentile-free) zone and to the continued stigmatization of Jews who remained unredeemed in the galut (diaspora). The positive force that animated the Jewish nation and its individual new-Jewish subjects issued from the negative process of excluding Palestine’s Indigenous owners.

Wolfe’s use of the term “goyim-rein” as if it is a well-known phrase of Zionists struck me, as it seemed extremely unlikely that Jews would have ever used the term, an obvious pun on the Nazi phrase “Judenrein,” or “free of Jews.”

I found that the phrase was first mentioned by Moshe Menuhin (1893–1983) , the father of famous violinist Yehudi Menuhin and a rabid anti-Zionist (and apparently Jewish antisemite.) Menuhin was raised in Palestine and attended the Gymnasia Herzlia in Jaffa – Tel Aviv.

In his 1965 book “The decadence of Judaism in our time,” later posthumously reprinted under a different title,  he claimed:

All through the years of our studies at the Gymnasia, we daily imbibed an endless harangue about our sacred obligations toward Amaynooh, Artzaynooh, Moladtaynooh (our nation, our country, our fatherland). It was drummed into our young hearts that the fatherland must become ours, “goyim rein” (clear of Gentiles—Arabs); that we must dedicate our lives to serving the fatherland and to fighting for it.

Menuhin finished high school around 1910, decades before the Nazis introduced the phrase “judenrein.” There is simply no way that Zionist Jews in Palestine would have used that term, even if they had advocated ethnic cleansing of Arabs (which they certainly did not.)
Proof of Menuhin’s lies come from his translation of “Moladtaynooh” as “Fatherland.”  It means “our homeland” or more literally “our birthplace,” but Menuhin’s anti-Zionism forces him to compare Israel to Nazi Germany and pretend that Jews used the Nazi term “Vaderland” for their land. It is no coincidence that he claims Zionists evoked Nazi terminology twice in one paragraph. It shows that Menuhin is not telling the truth.
There are obviously no corroborating stories from any of the thousands of Jews who attended the Gymnasia that students were given an “endless harangue” on building an Arab-free Jewish state or that the term “goyim-rein” was ever used.
It is a lie.
The “goyim-rein” slander has been published in numerous books and other academic papers, with hundreds of references in Google. It will be mentioned in academic papers and books in ways such as this:

Once one sees a reference, it appears authentic. The fact that the author might have made this up is not even considered; the quote that proves that Zionists are just like Nazis is too deliciously good to doubt. And the lie then gets propagated to the next paper, and the next one, as absolute fact.
This type of sloppy research, and the unquestioning use of previous poor research as a basis for the next paper,  is emblematic of the basic problems of the social sciences today.