If you look up Abby Martin on her own website, you will learn that at the tender age of 19, she “began streaming her thoughts and emotions through a paint brush” and “discovered her niche.” Unfortunately, Martin didn’t stick with painting and now prefers to ‘stream her thoughts and emotions’ through “news” programs that offer much food for thought to conspiracy theorists and people who can’t hear enough about how evil America and the West are. It goes without saying that pleasing such an audience also requires an intense hatred for the world’s only Jewish state.
Martin is certainly no slacker in this respect. Her views on Israel are informed by the likes of Max Blumenthal, whom she has interviewed repeatedly and reverently. In November 2014, she commiserated with Blumenthal when he complained bitterly about “How Germany is Using ‘Anti-Semitism’ to Shut Down Israel Criticism;” exactly a year later, she talked with him about “Palestine’s Rebellion” – a euphemism for the wave of murderous terror attacks that began a year ago – and “Israel’s Fascism.” Shortly before this interview with Blumenthal, Martin also produced a vile anti-Israel propaganda clip under the title “The Distortion & Death Behind Israel/Palestine Coverage,” which features some disgusting cartoons, and where she calls Gaza-based terror groups like Hamas and Islamic Jihad “resistance forces” (11.41). 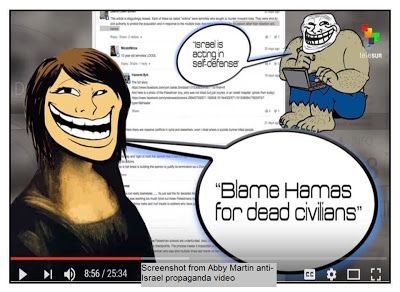 When she recently visited Israel in order to produce yet another program showcasing her hate for the world’s only Jewish state, many of her related tweets garnered hundreds of retweets and heartfelt “likes.” However, her Twitter fans seemed most pleased when she tweeted: “Israel is the most Orwellian country in the world. Its entire existence depends on projecting what they do to others as being done to them.” 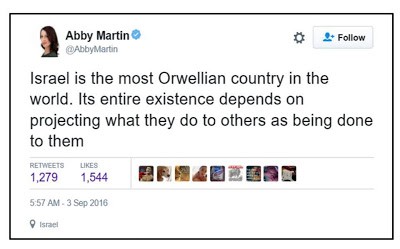 One of the responses to her tweet came from BDS supporter @Ha1Piper, who posted the following image: 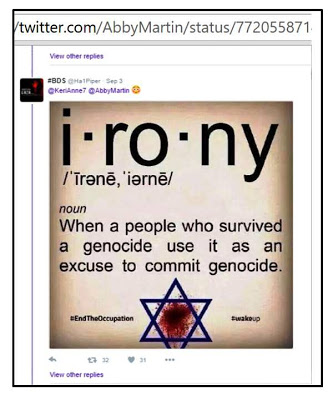 Claiming that Israel “uses” the Holocaust “as an excuse to commit genocide” is of course popular among anti-Israel activists, but it is also antisemitic.
Here you can watch Abby Martin making pretty much the same vile claims with great passion and utter conviction.
Of course, Abby Martin feels it’s totally unfair to accuse her of antisemitism when all she pretends to be doing is “being against Netanyahu’s policies” and “criticizing the Israeli government’s bad policies.” It’s really such an unfortunate coincidence that – just like Jew-haters everywhere – she seems unable to “criticize” the world’s only Jewish state without demonizing it as the epitome of evil while whitewashing murderous genocidal terror groups like Hamas that want very much what Martin and her fans want: to see Israel replaced with yet another Muslim-Arab majority state.