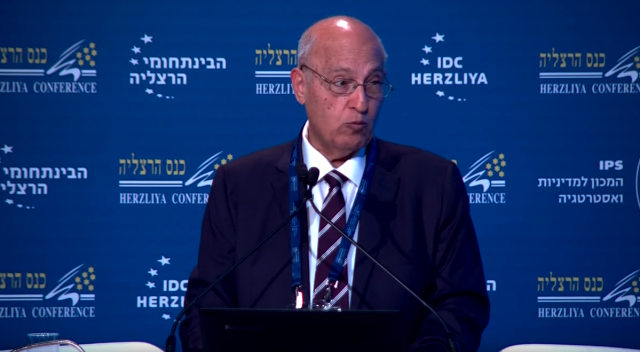 Dr. Nabil Shaath spoke at the Herzliya Conference on behalf of Mahmoud Abbas.

Here’s what he said about the issue of the PA paying terrorists and their families:


On social aid provided to families of Palestinian political prisoners and martyrs:  800,000 Palestinians have been detained in Israeli prisons since the occupation of 1967 and close to 1 million since 1948. One out of every three Palestinian males have spent time in an Israeli prison. Is any rational human being going to claim that these 1 million people are terrorists? That one third of the Palestinians are terrorists because they have been through Israeli jail? It’s really quite frankly a racist rhetoric too to really call all our political prisoners terrorists.

There you go! Choose a completely arbitrary and made up statistic to prove your point!

There have not been a million Palestinians in prison. Not even close. It is complete fiction.

Since the second intifada, there have been several thousand arrests a year. In 2002, probably the highest year ever, there were a reported 11,000 arrests according to PCHR.. Even that year the number of people in prison didn’t get close to 10,000 at any point in time.

The best I can determine is that the “one third of all Palestinians have been arrested” meme is so powerful that they inflate the number of supposed prisoners as the population grows to keep that ratio consistent.

Abbas and Shaath know they are lying, because they certainly aren’t paying stipends to million families or even a million people!. There  aren’t a million families under PA rule altogether! They pay to the roughly 6000 people who have been in prison at any time, most for multi-year terms, and their families, and the several thousand who have been released, and the families of “martyrs” who are almost invariably terrorists who were killed while attacking Israelis.

This one section of one speech given on behalf of the president of the Palestinian Authority is all the proof you need that you cannot trust the Palestinian leadership about literally anything.