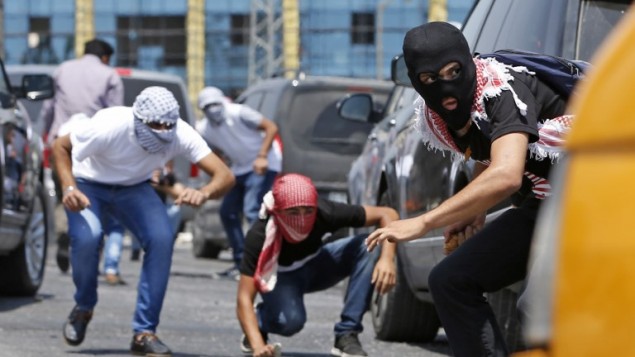 One detail of the events of the past two weeks that escaped notice is that Mahmoud Abbas is directly complicit in directing the actions of terror groups.

As the Times of Israel story I quoted in my last post said:

Tanzim is a terror group. We haven’t heard much from them for a number of years until last week during the “Day of Rage” which they organized.

Tanzim was founded by Yasir Arafat in 1995 – during the Oslo peace process – as a means for Arafat to maintain his own rejectionist group against Oslo (countering Islamist groups like Hamas) while pretending to support Oslo.

Marwan Barghouti was the head of Tanzim.

Tanzim was responsible for a number of terror attacks including several that specifically targeted children, such as the sniper murder of 10-month old  Shalhevet Pass and the murders of pregnant Tali Hatuel along with her four daughters, aged two to ten. They also lured a 16-year old boy to his death by posing as an American girl on the Internet before murdering him.

Like the Al Aqsa Brigades, Tanzim is a Fatah terror group that was never dismantled by Abbas despite promises.

Now he is directly instructing the group to act violently.

Shlomi Eldar disagrees, writing on July 20 that Abbas really wanted to avoid all of these riots and that Fatah militant leaders have been acting independently and forced Abbas’ hand.

If that is true, then since July 19 Abbas is not a leader but a puppet – and an enthusiastic one at that, as he is the one who has been inflaming tensions with his statements. Abbas is the one who decided to end security cooperation with Israel, not Fatah. Yet Abbas is still the head of Fatah and these groups nominally report to him, and based on the stories this week they seek his permission to riot.

At best Abbas has no control over anything and goes along with his most extreme, violent factions in order to remain in power. which means that anyone relying on Abbas to help bring peace is being dangerously naive.

At worst, Abbas is acting like Arafat, using these terror groups that report to him as a means to foment violence while maintaining the fiction of his own antipathy towards violence.

The media might not be noticing this yet, but you can be sure that Western intelligence agencies are quite aware of Abbas’ double game in pretending to be peaceful while directing or allowing terror groups to act violently, a game has already seen deadly results.