From a Washington Post op-ed defending Rashida Tlaib’s version of history, by Maha Nassar, an associate professor in the School of Middle Eastern and North African Studies at the University of Arizona:

While Tlaib certainly simplified a complex history that historians have and will continue to debate, her critics are also fundamentally misreading Palestinian history in three key ways. First, by focusing on episodes of violence, they ignore the long history of Arab-Jewish coexistence in Palestine. Second, by downplaying how harmful British colonial rule was to Palestinian society, they imply that Palestinians were driven to revolt by blind hatred rather than a desire for freedom. Finally, by citing the pro-Nazi propaganda of Mufti Hajj Amin al-Husayni to claim that “Palestinian leaders at the time sided with Hitler,” they conflate the statements and actions of a single individual with those of an entire people.

Throughout the 19th century, Muslims, Christians and Jews lived together in Palestine in relative harmony, largely in cities like Jerusalem, Jaffa, Hebron, Safed and Tiberias. Jewish residents regularly interacted with their Muslim and Christian neighbors, speaking Arabic with one another and living what historian Menachem Klein describes as “lives in common.”

Speaking Arabic and having “lives in common” does not mean that they lived happily together. Muslims might have thought so, but they weren’t on the receiving end. From  Remarks on the present condition and future prospects of the Jews in Palestine, by Arthur George Harper Hollingsworth, 1852:

This Jewish population is poor beyond any adequate word ; it is degraded in its social and political condition, to a state of misery, so great, that it possesses no rights. It can shew no wealth even if possessed of it, because to display riches would secure robbery from the Mahometan population, the Turkish officials, or the Bedouin Arab. …No advancement is made by the Jew of Palestine, in trafficking, in commerce, in farming, in the possession of settled houses or lands. There alone, where he ought to be first, he is last; and where in all other countries a Jew thrives and increases in wealth, in that one he is spiritless from oppression, and without energy, because without hope of Protection. He creeps along that soil, where his forefathers proudly strode in the fulncss of a wonderful prosperity, as an alien, an outcast, a creature less than a dog, and below the oppressed Christian beggar in his own ancestral plains and cities. No harvest ripens for his hand, for he cannot tell whether he will be permitted to gather it. Land occupied by a Jew is exposed to robbery and waste. A most peevish jealousy exists against the landed prosperity, or commercial wealth, or trading advancement of the Jew. Hindrances exist to the settlement of a British Christian in that country, but a thousand petty obstructions are created to prevent the establishment of a Jew on waste land, or to the purchase and rental of land by a Jew. “

...What security exists, that a Jewish _ emigrant settling in Palestine, could receive a fair remuneration for his capital and labour? None whatever. He might toil, but his harvests would be reaped by others; the Arab robber can rush in and carry off his flocks and herds. If he appeals for redress to the nearest Pasha, the taint of his Jewish blood fills the air, and darkens the brows of his oppressors ; if he turns to his neighbour Christian, he encounters prejudice and spite ; if he claims a Turkish guard, he is insolently repulsed and scorned. How can he bring his capital into such a country, when that fugitive possession flies from places where the sword is drawn to snatch it from the owner’s hands and not protect it ?

I have lots of other examples of how Arab oppressed Jews before Zionism. Nassar’s and others’ description of life as good between the groups is a myth, pure and simple.


The question of self-rule gained greater urgency over the course of the 1920s as growing Jewish immigration led to thousands of Palestinian peasants being forced off land they had lived on for generations. Many of them migrated to shantytowns on the outskirts of nearby cities, looking for work and often unable to find any. As social and economic pressures increased, Palestinian leaders — who lacked any real power and were divided among themselves — could do little to help.

During the 1920s the Arab population of Palestine exploded because of illegal Arab immigration – immigration to take advantage of the better economy that the Jews brought. Jewish capital did not hurt the Arabs, on the contrary, it improved their lot as a group. Individuals who lost their jobs as Jews bought farmland from their owners is a disruption that happens everywhere, but to use that to claim that Arabs as a whole suffered is not the truth.

With their displacement continuing unabated, in April 1936 Palestinian Arabs launched a general strike to demand independence. While some local leaders like preacher ‘Izz al-Din al-Qassam had called for attacks against British and Jewish targets, as historian Matthew Kraig Kelly has recently demonstrated, the Palestinian leadership (including the Mufti) initially tried to keep the strike unarmed. But widespread British police brutality soon led to an uptick in Arab violence, culminating in a revolt that lasted three years.

During the summer of 1936 there were many attacks and murders of Jews. It was not “unarmed” at all. The Mufti’s record at fomenting violence against Jews is well known. And the strike was also explicitly aimed at ending Jewish immigration, a major point that Nassar conveniently leaves out.

The Mufti then became a prominent Nazi propagandist, becoming well known for his World War II broadcasts that called on Arabs to revolt against the British. And yet, these calls were largely ignored. In fact, recent studies have demonstrated that Arabs in Palestine were not generally pro-Nazi, and many were extremely critical of fascism, despite the Mufti’s loathsome exhortations. They were joined by a group of leftists, secular, anti-colonial Arab intellectuals who also vehemently opposed the Mufti’s anti-Jewish rhetoric, calling instead for class solidarity and Arab-Jewish cooperation.

Yes, Arabs of Palestine were not unanimous in their support of Nazism – but the Mufti wasn’t an aberration, either. Arabs in Palestine were fascinated with and attracted to Nazism way before the war, as I showed in a recent article: 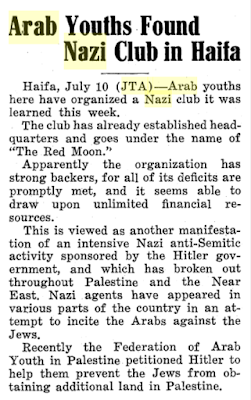 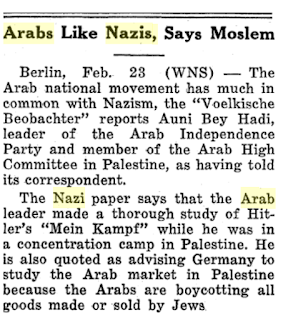 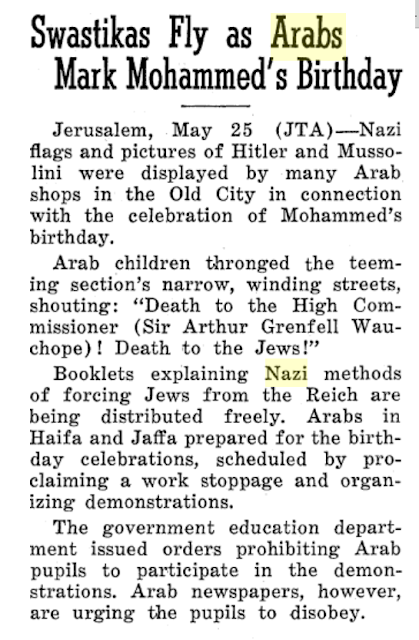 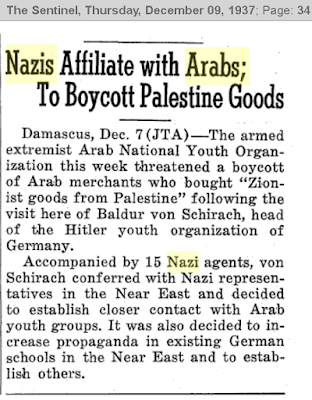 This is revisionist history, and the Washington Post should have fact checked it.