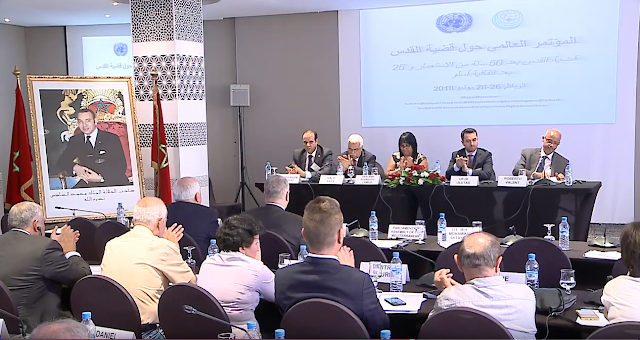 It is difficult to fathom how much time the United Nations spends on its anti-Israel activities.

Next month, the UN will hold a conference in Geneva with the Orwellian title “Preserving the cultural and religious character of Jerusalem.”

It blames Israel for “Judaizing” Jerusalem.


The Committee on the Exercise of the Inalienable Rights of the Palestinian People (CEIRPP), with support from the Organisation of Islamic Cooperation (OIC), will convene the International Conference on the Question of Jerusalem “Preserving the cultural and religious character of Jerusalem” on 27-28 June 2019 at the United Nations Office at Geneva (UNOG).

The Conference will address the issue of Israel’s policies and measures aimed at changing the character of Jerusalem, which have significant political, legal and socio-economic ramifications, including the threat of derailing prospects for a peaceful solution to the Question of Palestine. The Conference will seek to formulate concrete actionable recommendations and ways forward among the relevant stakeholders for the preservation of a City, considered sacred by three religions.

The Conference will bring together Palestinian, Israeli and international experts, representatives of the diplomatic community and civil society to discuss viable and practical strategies to (1) stem efforts to alter the demography and character of the City, (2) provide viable alternatives that preserve the religious and cultural character of the City, and (3) ensure that all its Palestinian inhabitants enjoy their inalienable rights.

This is an annual conference; last year it was held in Rabat, Morocco. You can see a synopsis of the discussions here.

Of course, no one in history has preserved Jerusalem’s historic, cultural and religious character more than Israel has. A look at how Jordan destroyed every single synagogue in 1948 and almost banned Jews from visiting for 19 years (not Israelis – Jews!) is all you have to know about how well Jerusalem was “preserved” under Arab rule for Jews.

Even Christians were oppressed under Jordan’s rule, forcing many of them to leave.

In 1953, Jordan restricted Christian communities from owning or purchasing land near holy sites, and in 1964, further prohibited churches from buying land in Jerusalem…In order to counter the influence of foreign powers, who had run the Christian schools in Jerusalem autonomously since Ottoman times, the Jordanian government legislated in 1955 to bring all schools under government supervision. They were allowed to use only approved textbooks and teach in Arabic.Schools were required to close on Arab national holidays and Fridays instead of Sundays. Christian holidays were no longer recognised officially, and observation of Sunday as the Christian Sabbath was restricted to Christian civil servants.

Under Israeli rule, Muslim, Christians and Jews have simultaneous rights in Jerusalem for the first time in history.

Yes, we all know the UN is a joke, but it is worth being reminded every so often.