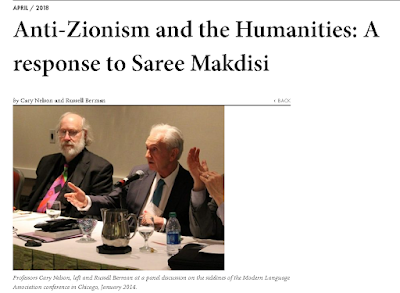 In Fathom Journal, Cary Nelson and Russell Berman write a detailed and comprehensive refutation of an anti-Israel paper published in Critical Inquiry, a formerly respected academic journal, by Saree Makdisi. But their paper is in fact a strong indictment of liberal arts anti-Israel “scholarship” altogether. The summary:

This lengthy essay by two leading US professors challenges the world of academic publishing. They identify the symptoms of a ‘widespread institutional corruption that extends far beyond the debates over the Middle East’: the move of disciplines and journals from textual interpretation and scholarship to politics and polemic; the fundamental breakdown in the peer review process in the humanities and interpretive social sciences, as publishers with a strong anti-Zionist bias submit manuscripts to highly sympathetic anti-Zionist readers who laud the manuscript’s ‘courage’ and recommend publication, creating an anti-Zionist echo chamber increasingly free from some traditional scholarly controls, including fact-checking; and, not least, the spread of the terminology of a body of theory ‘marshalled in the service of preexisting political convictions’ and taking on ‘the character of sacred incantation’, the mere ‘deployment of its vocabulary’ taken as ‘sufficiently proving the case being made’. Their particular focus is the work of Saree Makdisi, but their target is contemporary academic culture itself.

The authors bring many, many examples of how Makdisi is simply lying (and he knows it.) For example, Makdisi claims that Israel has no laws to protect equal rights; Berman and Nelson show otherwise, introducing their  rebuttal this way:

Makdisi underwrites his critique of Israel proper with the claim that Israel’s Declaration of Independence, which commits the state to equality of all citizens without regard to religion, is merely ‘aspirational’ (323) rather than legally binding. Yet prominent Israeli jurists, among them former Supreme Court Chief Justice Aharon Barak, believe the Declaration has constitutional status. In any case, calling the Declaration merely aspirational erases its considerable impact on Israeli law and culture. The Declaration’s commitment to equality has frequently been referred to in court decisions.[10] Makdisi imagines that ‘nowhere in Israel law is the right to equality protected’ (309), but an objective reading of Israel’s Basic Law: Human Dignity and Liberty (1992) proves otherwise, as many rights are thereby guaranteed to all.

This pattern is repeated over and over, where Makdisi’s assertions are proven to be utterly false, and any decent academic journal should have noticed this. On the contrary, the editor of Critical Inquiry, when inviting a response to Makdisi’s essay (but limiting it to only 5000 words,) wrote to one of the authors that Makdisi’s essay was


‘a serious, well documented scholarly essay,’ by which one can only conclude he meant ‘It has lots of footnotes.’ “But whether either those footnotes or the essay itself, which is rife with undocumented assertion, actually proves anything is another matter. It is also clear that CI, like most humanities journals, apparently has no tradition of fact checking, since a substantial number of Makdisi’s claims cannot survive such a review.

Space doesn’t allow me to go into detail on all that Nelson and Berman write, but a single (edited) example with which I was not familiar is enough to show how dishonest anti-Israel academics are:

For Makdisi the real crime begins not with the 1967 war and the Israeli occupation of Gaza and the West Bank or even with the Nakba itself. The fundamental violence done was with the establishment of the Jewish state. His essay therefore begins with a symptomatic narrative, the 1986 creation of a new town, Eshchar, in northern Israel, which Makdisi disingenuously identifies as a ‘settlement,’ a term ordinarily reserved for Jewish settlements in the West Bank. Presumably he considers all Israel towns and cities to be settlements in occupied territory. Makdisi contrasts the recognition of Eshchar with four nearby towns that Israel purportedly refused to recognise, but — of the towns he names, Kamane was recognised in 1995, Hussiniyya was recognised in 1996, and Arab al-Nai’m was recognised in 2000, at which point they were eligible for and received the municipal services Makdisi seems to believe they still lack.[23]All three, along with three other Bedouin villages (Ras al-Ein, D’meide, and Wadi Salameh) are members of the Misgav Regional Council, which has a Bedouin Deputy Chair. These are all, as it happens, Bedouin villages, though Makdisi identifies them as Palestinian.[24] It is thus odd that Makdisi insists that the Israeli government ‘adamantly refuses to permit Palestinians to develop a single new town of their own’ (306), although seven recognised new Bedouin towns have been established in the Negev since 1968. They are: Rahat, Hura, Tel as-Sabi, Ara’ra, Lakiya, K’seife, and Shuqib Al-Salam.
The attitude Jewish area residents have displayed toward nearby Bedouin villages for a generation completely discredits the claim of ingrained and persistent racism that Makdisi promotes.

As it happens, we have a mutual friend, a faculty member on this side of the ocean, who lived very near Eshchar (in Eshbal) for a time. She put us in touch with Eshchar’s former local council chairman, and he put us in touch with long-term Bedouin leader Nimer Na’im. They confirmed what we learned: Eshchar had supplied Arab al-Nai’im with access to water in 1993 and helped with other projects such as construction of a kindergarten, but the intensive work for recognition began five years later. Eshchar’s Jewish chairman Yisrael Ne’eman and Bedouin leader Nimer Nai’im walked together across the rocky hilltop their villages share — suitable for grazing but not agriculture — and in June 1998 agreed on a border. The terms were then discussed and approved by Eshchar as a whole. The Eshchar general assembly voted 40-2 to endorse the agreement, with the two dissenters feeling Arab al-Nai’m should have gotten more land than it asked for. The following month Ne’eman, another Eshchar resident, and religious politician Hanan Porat, whose daughter lived in Eshchar, went together to the Ministry of Interior and met with its director general to petition for Arab al-Nai’m to become a permanent village.
Nimer, we should note, was quite angry, calling Makdisi’s account ‘deceitful’ and replete with ‘lies’; he could not understand why someone halfway across the world would be involved in misrepresenting the character of two villages engaged in helping each other. He couldn’t understand why Makdisi did not even bother to contact anyone in the villages to consult with any of the parties involved. Why would someone in the US make up claims about Eshchar and Arab al-Nai’m? It was not easy to explain. Precisely this disregard for facts and for fact-checking starkly displays the methodological insufficiency of such politicised humanities scholarship today.
The two villages have instituted cross-community cooperation, planning, and future development. Since the Bedouin village has less land, their building permits allow construction to up to three stories to compensate vertically, whereas Eshchar is limited to two-story buildings. The two villages see themselves as having carried out a grassroots peace process, and as devoted to ‘good neighbor relations.’ They refuse to define their relationship as one of ‘co-existence’ because coexistence can too easily mean that ‘one party is the rider and the other the donkey.’ Each village keeps its own cultural identity; they agree to disagree when necessary. For Makdisi the story of the villages is one of long-running hatred and discrimination, while for us, it is one of rebirth and reconciliation, of empathy and social responsibility across ethnic lines, a story of hope.
Eshchar prides itself on its heterogeneous community of religious and non-religious Jews of multiple national origin. But Makdisi finds ‘this claim to extraordinary heterogeneity might seem suspiciously homogeneous’ (306).[27]After all, they are all Jews. In other words, they are not really different after all; Jews are all the same, as far as Makdisi is concerned.[28] That would be news to Israelis themselves, who have confronted the challenge of integrating the radically different cultural identities of immigrants from scores of different countries and cultures: Ethiopia, Germany, Iraq, the Soviet Union, and elsewhere.
Because the 800 residents of Eshchar are all Jews, Eshchar in Makdisi’s eyes is ‘an attempt to maintain insular homogeneity against surrounding otherness’ (309). Makdisi is of course employing synecdoche. Eshchar, as he immediately makes clear, stands for Israel as a whole, ‘a colonial settlement implanted on land usurped from its ethnically cleansed indigenous owners’ (309). That the Jews began by purchasing land is irrelevant. That Israel was established with an international mandate from the League of Nations, recognising the historic Jewish connection with the land, and subsequently affirmed in the UN’s founding charter, is irrelevant. Moreover, like South Africa, Makdisi insists, this is a racist enterprise set in what Israelis, so Makdisi insinuates, allegedly take to be an Arab ‘desert of backward, violent, fundamentalist tyranny.”

It is a shame that one can’t even imagine that the humanities departments of any university will take this essay to heart and start doing basic fact checking against anti-Israel “scholarship.”  It is simply too ingrained.