I just found this in the JTA archives from September 5, 1968:

Since the Six-Day War, secret negotiations conducted by Spain have resulted in freeing several hundred Jewish families from Egypt, the Washington Post said Wednesday. “Possibly 500 families–Egyptian citizens as well as aliens–have been helped out of Egypt and have been dispersed” to Western countries. “Many stateless Jews,” the Post said, “have been given Spanish passports.” It said the International Red Cross and United States Jewish organizations have aided the effort.
“Some estimates are that 1,000 Egyptian Jews, most of them permitted to take only their personal belongings, have been helped to resettle abroad,” the newspaper reported. The Post noted, however, that “an estimated 250 Jews remain in confinement, principally in the Al-Thawra prison near Cairo. Other Jews freed previously have alleged that they were forced by prison officers to submit to sexual perversion and other indignities and were beaten and tortured.”
Last December the exodus was reduced to a trickle, and since July, the Post said, the Jewish exodus has apparently stopped.
Credited with the largest role in arranging the release of many of the Jews is the Spanish Ambassador in Cairo, Angel Sagaz. Mr. Sagaz, the Post noted, “played an important role in getting Jews out of Nazi Germany during World War II.” The Post quoted one Jew rescued from an Egyptian prison as saying that Ambassador Sagaz “went back as far as the inquisition in order to construe for the Sephardic Jews a Spanish origin and give them a passport.”

Ambassador Angel Sagaz was a hero who was not recognized during his lifetime. (His NYT obituary did not mention this episode.)
This account notes that when Sagaz found out that Jews could not even take their jewels with them from Egypt, he told them to deposit them in the Spanish Embassy in Cairo and they were later delivered by diplomatic pouch to them in Spain. He also saved some synagogue ceremonial objects.
One of the reasons that Sagaz was successful. according to this account, was that Spain at the time did not recognize Israel and was friendly with Arab states, so it couldn’t be accused of “Zionist” leanings. Sagaz lobbied the police, Egypt’s ministries and Nasser himself, claiming that the Jews were Spanish citizens based on a 1924 edict from Spain’s leader Primo de Rivera that Sephardic Jews could become citizens. (Spanish diplomats used that same ruling to save 5000 Hungarian Jews during the Holocaust.)
Angel Sagaz’ story needs to be better known. Here’s the only photo I could find of him, along with his wife, who helped him in his heroism. 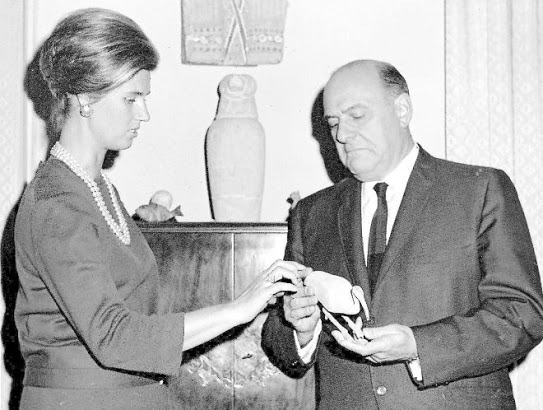