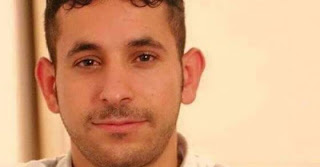 According to Palestinian media, a man who moved from Gaza to Sweden was murdered yesterday.

Reports say that Mohammed al-Bazem, 28, was shot in the head and neck as he opened his door yesterday.

Original reports said that he was a former prisoner in Israeli prisons, but his father denies that. He says that he moved to Sweden in 2008 after his brother was killed in the first Gaza War (which seems unlikely since that war ended in 2009 and chances are Israel didn’t allow anyone to emigrate during the war).

According to his father, al-Bazem complained about a loud party that was happening on the apartment above his about an hour before his death. The father, seemingly knowing lots of details from thousands of miles away, says that the party featured alcohol and drug abuse.

And one of the residents in that apartment is a Jew.

What more evidence do you need?

Ma’an is now reporting as fact “A Jewish man shot Mohammed from close range, killing him with two bullets in the head and neck” even though its headline says that there is still ambiguity surrounding the case.

Police in are saying nothing beyond that a young man was shot to death in his apartment.