J-Street has a page dedicated to the 100th anniversary of the Balfour Declaration, including criticism of the document by this supposedly “pro-Israel” organization.

[T]he Declaration didn’t explicitly mention the rights of the indigenous Palestinian people who had inhabited the land for centuries and, most importantly, failed to recognize the Palestinian right to self-determination in a national home alongside the Jewish state. In many ways, these omissions laid the groundwork for the Israeli-Palestinian conflict.


As we mark 100 years since the Balfour Declaration and even celebrate the first international recognition of the cause of Jewish national independence in the modern era, there seems to me to be good reason to take equal notice of the century of violence and the ongoing conflicts that trace their origins to the mistakes and gamesmanship of the Balfour era.

Really? There was no Arab violence against Jews in Palestine before 1917?

But what is more interesting is that this “pro-peace” group did not say a word about the most successful peace event of the past century for Israel – the 40th anniversary of  Sadat’s visit to Jerusalem, which happened this month.

The only peace group I could find that mentioned it was Peace Now, which mentioned it in a weekly interview with Yossi Alpher – and not wholly supportively.

There are at least two reasons the “peace camp” doesn’t like to mention the Egyptian-Israeli peace agreement.

One is that they want to paint Israel as the party that doesn’t want peace, and the fact that Israel has shown that it really does want peace and is willing to make sacrifices for real peace contradicts their entire basis for existing.

Two is that not only did Israel make peace with Egypt, but it was a right-wing Likud government that made peace. That is something they cannot stomach. 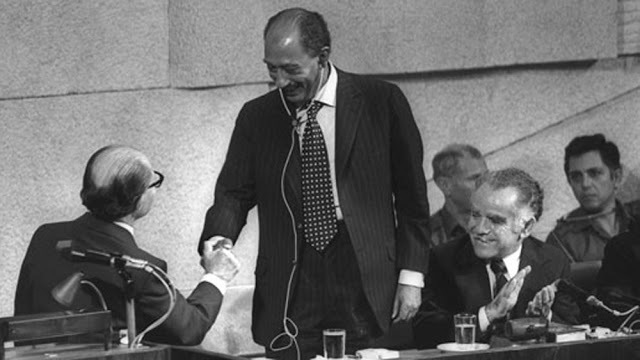