A liberal Orthodox rabbi, Shmuly Yanklowitz, writes that he cannot in good conscience say the traditional prayer for the welfare of the government (“HaNoten Teshua”) in the Trump era.


Because of my commitment to the integrity of prayer, starting this week (January 16, 2017), I can no longer recite or say amen to the Shabbat prayer for the success of the U.S. President.

So I have drafted a new prayer that I will plan to recite each Shabbat morning. If you also feel it’s important to pray for the U.S. government but also feel you cannot pray for the success of this President, feel free to use this or adapt it as you please. I felt that it was not enough to simply avoid the U.S. President in the prayer for the government but to remind myself of the billions of vulnerable people who are at risk under his rule, and challenge myself each Shabbat to build up the strength for another week of spiritual resistance.

His prayer looks more like it was inspired more from the pages of liberal media than from Jewish tradition:


O God and God of our Ancestors, help us with our struggle. We yearn for the success of the American government, to fulfill its righteous mandate to protect its citizens from threats internal and foreign, to fortify the bonds between liberty and justice, to ordain fair treatment under the law, and to expand welfare to all those within its capacity.
We pray that the vision of the prophets—the redemptive power of justice; relief for the poor, welcome for the marginal, protection for the oppressed, care for the sick—and the vision of the Constitution of a more perfect union be brought about. Guide the incoming leader of this country away from his basest instincts, thwart his plans to target certain groups and strengthen white supremacy; for You know, God, that all were created in Your image.
…

With all due respect, Rabbi Yanklowitz is missing the boat.

The traditional prayer of HaNoten Teshua has been around, in one form or another, for over five hundred years. And it is based on much older traditions back to Jeremiah’s exhortation to pray for the ruler of your city in the first years of the first diaspora:


And seek the welfare of the city to which I have exiled you and pray to the LORD in its behalf; for in its prosperity you shall prosper.

Jews offered sacrifices for the government in Second Temple times.

More explicitly, Pirke Avot (3:2) says, “Rabbi Chanina, the deputy Kohen Gadol says: ‘Pray for the welfare of the government, because if people did not fear it, a person would swallow his fellow alive.'”

He said this during the reign of Nero.

The earliest  modern form of the prayer can be seen in a Sephardic prayer book from 1490, blessing the Spanish rulers who were about to expel the Jews two years later:

“He who grants salvation to kings and dominion to rulers, whose kingdom is a kingdom spanning all eternity may he strengthen, bless, and uplift higher and higher our Lord King Fernando.  May the King of Kings redeem his soul from death and in war from the sword.  And may He incline his heart to do good to Israel and to speak good of them wherever they are and let us say Amen.”

Is Donald Trump, before even taking office, worse than Nero? Worse than Isabella? Worse than the Czars who were also prayed for in this fashion?

The prayer itself is multifaceted, an important point that Rabbi Yanklowitz seems to miss. While on the surface it is a prayer for the success of the ruling government, the choice of verses being quoted reveal a much more complex prayer.
Here is the text as translated in 1655 in a letter to Oliver Cromwell to convince him to let Jews return to England after their expulsion, which is essentially unchanged today:

He that giveth salvation unto Kings, and dominion unto Lords, He that delivered his servant David from the sword of the Enemy, He that made a way in the Sea, and a path in the stronge waters, blesse and keep, preserve and rescue, exalt and magnify, and lift up higher and higher, our Lord:
[And then he names, the Pope, the Emperour, King, Duke, or any other Prince under whom the Iews live, and add’s :]
The King of kings defend him in his mercy, making him joyfull, & free him from all dangers and distresse.
The King of kings, for his goodness sake, raise up and exalt his planetary star, & multiply his dayes over his Kingdome. (this line has been changed to remove the reference to astrology in the wake of fear of false messiahs)In his dayes and in our dayes, let Iudah be safe, and Israel dwell securely,
and let the Redeemer come to Israel, and so may it please God. Amen.

Here’s the English version from the time of King George – the same King George who fought against the United States in the Revolutionary War: 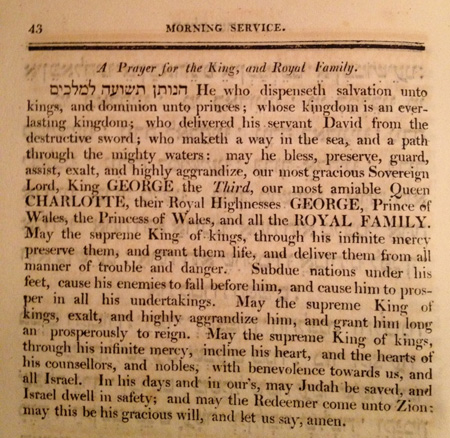 As mentioned, this prayer has some depth behind it, and is not a simplistic prayer for the leader’s success as it appears. The choice  of Biblical allusions in the prayer prove this.
The very beginning quotes a verse from Psalms 144: “To You who give victory to kings, who rescue His servant David from the deadly sword..” But the very next verse says: “Rescue me, save me from the hands of foreigners, whose mouths speak lies, and whose oaths are false.“
This verse was chosen deliberately. The Jews who offered this prayer were under no illusions about their rulers.
Similarly, the allusion in the prayer to “He Who made a road through the sea And a path through mighty waters” is referring to the destruction of the armies of Pharaoh: “Who destroyed chariots and horses, And all the mighty host— They lay down to rise no more, They were extinguished, quenched like a wick:”
Jews who have said this prayer in one form or another over the millennia were no fools, as people like Rabbi Yanklowitz seem to think. They knew that the rulers could be good or evil, benevolent or vindictive, and they also knew that God is the ultimate Protector, not the current flesh-and-blood ruler.
It is the height of hubris for Yanklowitz to believe that he is somehow more astute than the generations of far more brilliant rabbis who preceded him.
The prayer of HaNoten Teshua is not fawning – it is cautionary. It can be said wholeheartedly by both supporters and opponents of Donald Trump (anyone who thinks that Trump is worse than Ferdinand and Nero are too far gone to reason with.)  The prayer is a reminder for both the supporters of Trump and previous supporters of Obama that Jews should not put their faith in princes (Psalms 146:3) – but it is a good idea to pray that their leaders have the wisdom to do the right thing.
References:
OU
Schechter Institute
Jonathan Sarna
Torah Musings