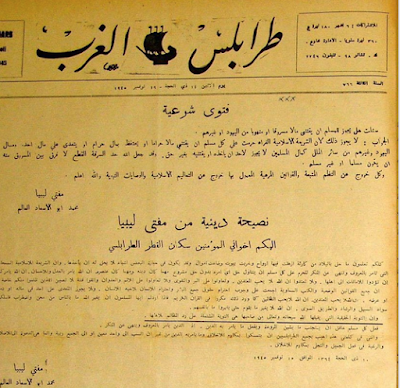 This is a copy of the fatwa issued by the Grand Mufti of Tripoli, published in the Official Gazette, prohibiting seizure  of Jewish property.

A total of 130 Jews and one Muslim were killed in riots in and around the Tripoli area in November 1945. Shops and homes were looted and property burnt. The Grand Mufti of Tripoli issued a fatwa against the seizure of Jewish property following the November 1945 riots against the Jews of Libya.

In what was described by one British source as a ‘brutal and savage pogrom’, the elderly, women and children were wounded by sticks, clubs, knives cleavers, piping and hand grenades. Bodies were quartered, children had their heads bashed against walls and old men were pushed out of windows.

Nine synagogues were burnt down, 35 Torah scrolls and 2,000 sacred books were destroyed. About 90,000 kg of silver from sacred ornaments were plundered. The damage was put at 268 million Military Administration lira (MAL). One British pound equalled 480 MAL in 1945. The assessment made by the Jewish community was of course much higher. Over 5,000 people were made destitute and had to be housed and fed in displaced persons camps.

Libya was then still under British military rule. The Jews held the British authorities partially responsible for the riots as they did not intervene directly in the pogrom until the third day of violence. Of the 550 Arab rioters only 289 were tried in court. The majority were set free months later. To maintain a semblance of even handedness the British also arrested ten Jews for daring to defend themselves.

Tensions between Jews and Arabs had been rising since 1944. A worsening economic situation, Arab nationalism and events in Palestine, together with the activities of the recently-founded Arab League, combined to aggravate relations. Then, on 2 November 1945, anti-Jewish riots spread across Egypt. Libyan notables tried to reassure the Jews; but on 9 November a demonstration erupted into violence in Tripoli and soon spread to neighbouring towns of Amrus, Tajuria, Zanzur, Zawia and Kussabat.