TOP NEWS
http://jewishrefugees.blogspot.com/2016/11/happy-as-mountain-jew-in-azerbaijan.html
Is it possible to live happily as a Jew under Muslim rule? Yes it is – in Azerbaijan where 9,000 Jews live in harmony, says Said Mousayev in the Jerusalem Post.

The history of Azerbaijan itself and its peoples is multicultural. In particular, the history of the Jews in Azerbaijan is exemplary. This is exemplary because Azerbaijan, a country with a Muslim majority 96%, is against anti-Semitism. In Azerbaijan, religion is separate from the state. All confessions are equal before the law. The national educational system is secular. The official language of the Republic of Azerbaijan is Azerbaijani. According to the most recent census, there are people of 150 ethnicity living in Azerbaijan, 22 of them having compact settlements in different regions of the state.
There are three Jewish communities in modern Azerbaijan: Mountains Jews (or Bukharian Jews), Ashkenazi Jews, and Georgian Jews. The community of Mountains Jews is the oldest, their ancestors arriving to the territory almost 15 centuries ago, according to some data. This version claims that after the Mazdakeans were subdued in Iran (late 5th – early 6th century A.D.), most of the Iranian Jews who had supported them were exiled to the outskirts of the empire, i.e., today’s Northern Azerbaijan and Southern Dagestan.
The ancestors of the Mountains Jews spoke a South-Western dialect of the Persian language, which the modern Mountain Jewish language of Old Persian origin called Juhuri or Judeo-Tat, related to the Persian spoken by Jews in Tajikistan and Uzbekistan, and also containing many Turkic and Semitic elements. 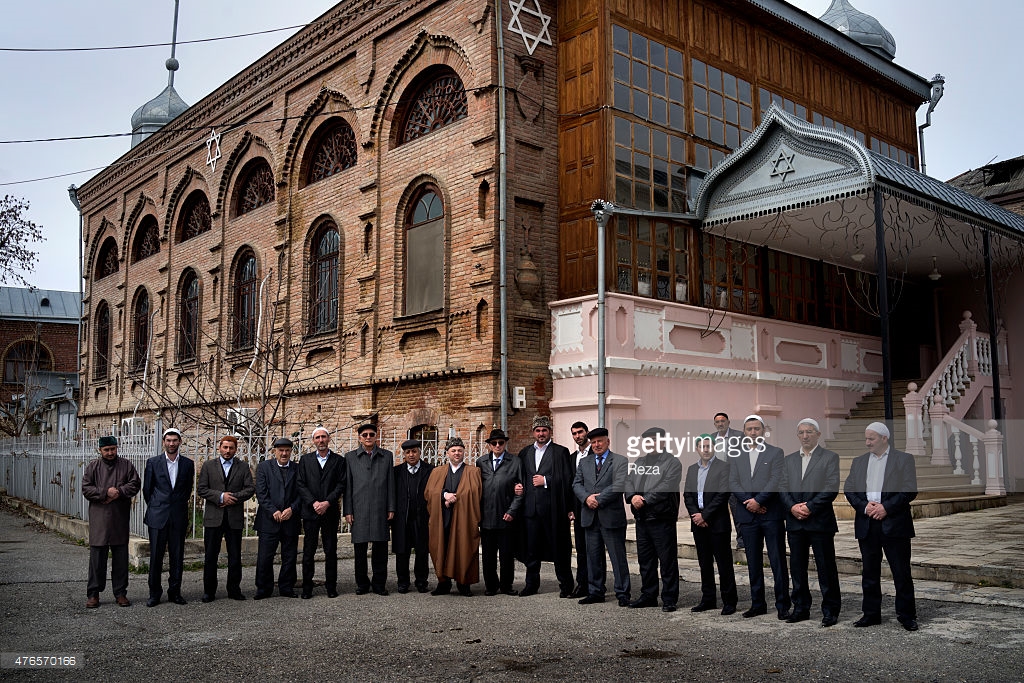 The great synagogue in  Baku (Getty images)
As of 2016, approximately 9,000 Jews live in in perfect harmony with Muslims and other religions in Azerbaijan. Recognized as Juhuros, Mountain Jews self-nominate, would be descendants of the 12 tribes exiled from the Kingdom of Israel by the Assyrian king Shalmaneser V in the VIII century BC.

Historians, however, agree on the presence of Jewish communities in the Eastern Caucasus as early as the 3rd century. Fleeing persecution in Persia, the Mountain Jews settled in the area and were gradually cut off from their Persian roots over the centuries. Thus, in the 7th and 8th centuries, their number increases in the North Caucasus and on the territory of the present Republic of Azerbaijan because they are fleeing the Arab threat to the south, contained by the Khazar kingdom, Crimea to the shores of the Caspian Sea.